The new generation of Office add-ins is really in place!

The new generation of Office add-ins is really in place!

Ever since 2003, Microsoft Office add-ins, which we will from now on designate as “first generation” add-ins or v1, have arrived in successive waves: “raw” COM add-ins, IDTExtensibility2, VSTO, etc. These are mature technologies that have allowed the development of excellent products, sometimes even with great commercial success. However, like all current technology, they are challenged by a new generation. Thus, new generation add-ins, at first called “App for Office”, arrived in 2013 and are nowadays real alternatives to first generation add-ins. Here in Keluro, we have applications based on both these technologies and we have therefore developed a real expertise in these domains. A year and a half after the publication of our first Keluro Web Analytics application on Office Store, six months after the launch of KMailPrint and on the eve of a new application, we think it is appropriate to make a situational analysis of these new Office extensions.

Why these two generations are different

So as to better understand the differences from the user’s point of view, let’s do a quick detour on the purely technical level. In fact, the technologies that sustain first and second generation add-ins are radically different. In the development of a first generation Office add-in, we access the Office COM object model directly. The COM technology date from the 90s, that is, from the first versions of Office, and can be considered obsolete. However, to improve this situation, it is possible to develop on the .NET platform with interoperability libraries. On the contrary, second generation add-ins are based on so-called “web” techniques, using HTML5 and CSS for graphic display and javascript for the core of the application. First generation applications are therefore based on “desktop” type layers and so cannot be executed on a web browser. Microsoft adapted to the circumstances changed by Google with Docs and Spreadsheets, and Office software is now accessible from a browser in an online simplified version. Nowadays, this is an undeniable tendency, mobility is here and it is up to the applications to adapt, even in the case of software with a global reach, such as Word, Outlook or Excel. Furthermore, it was essential to launch a version of Office for Mac at an equivalent level to the Windows version and therefore with the possibility of installing extensions. So, Microsoft has naturally turned to web technologies for this new generation of add-ins, as these are the only ones that can fulfill all these requirements. So, the new Office add-ins work in an online version of Word, Excel and others, but also in the desktop version.

The possibilities brought by the v1 add-ins are almost limitless, because, from the point of view of the source code, they have access to the whole of the Office object model. But this strength is also a weakness: a first generation Office add-in is totally intrusive, for example, it shares the main thread of the host application and can therefore block it or crash it. This is another of the main differences between the two generations of add-ins. For the second generation, the extensions run in a secure and controlled environment. For the application’s editor, it is also a way of not clashing with the legitimate concerns with the IT teams of their customer companies. As these v2 add-ins can also be installed securely by non-administrator users, these can test and therefore recommend a product before a more general diffusion within the company. However, we have to admit that the features in these v2 add-ins are still inferior to their predecessors. However, this is in constant evolution and is advancing rapidly. For example, last month Microsoft announced the launch of Outlook add-ins Command that allow a side panel in Outlook add-ins as well as buttons and menus in the application ribbon. This month these features are in production for Outlook 2016 versions, therefore showing the dynamic and reactive nature of Microsoft in this respect. 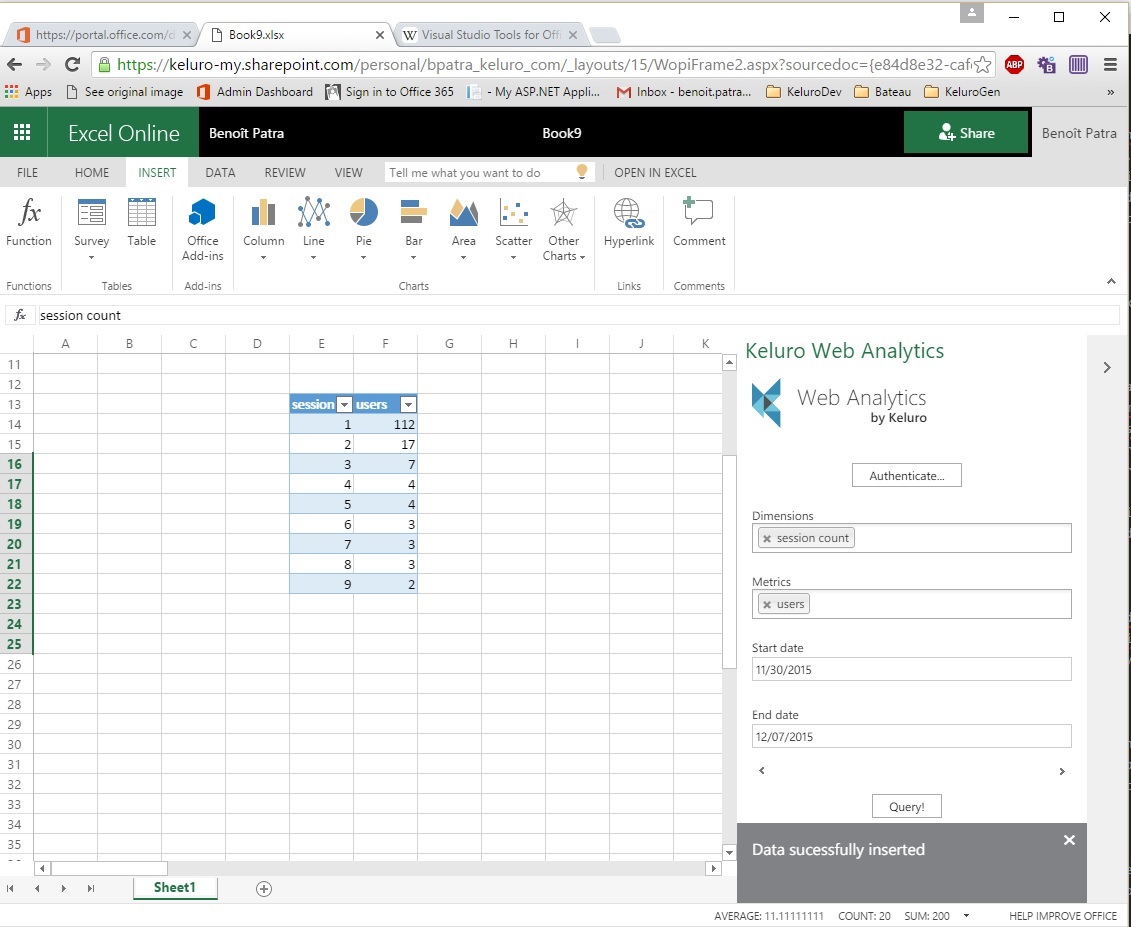 The Office Dev community and the awakening of APIs

V1 add-ins were often applications developed internally or directly for B2B. Many developers steered clear of it. However, this community was unable to join together. Technical forums were dispersed between personal blogs, Microsoft Developer Network (MSDN) and the very popular stackoverflow. This is another difference, as nowadays development on these new Office technologies is supported by a real community articulated around dev.office.com. An overflowing activity is present on social networks, a series of podcasts animated by Jeremy Thake on Office development is available online. Also, a colossal number of examples of documentation or code are available online, especially on github. One of the fundamental aspects of the community is to enlighten developers on the possibilities made available by Office, namely by Office 365 and its APIs. Microsoft has invested considerably so that independent editors, such as Keluro, can develop business applications through Office 365 extensions, thanks to a real application “hub” called Azure AD.

Another aspect that leads us to believe very strongly on the boom of Office v2 add-ins is the reduction in entry “cost” on the development level, and therefore on the financial level. In fact, the adhesion of these new generation apps to the Microsoft ecosystem is lower. Besides, the access to Office.js API, a v2 add-in, is a very common web application. These technologies are mastered more and more and by an increasingly greater number of people. There is nowadays a point of convergence in many software branches, such as mobile application development. A good web developer can therefore start this type of extension on Office without fear. This didn’t use to be the case before, as making a stable add-in required a lot of experience. So we find in the development of web add-ins tools and frameworks that have proved their worth in other domains, such as Bootsrap, angularJS, etc.

An Office Store that takes off

Finally, we think that the real vector of success of these new add-ins is the creation of the “market place” called Office Store. It simply consists of the equivalent for Office of the market places we are familiar with for mobile devices, such as Apple Store, Google Play or Windows Store. Eighteen months have passed since we published our first free Keluro Web Analytics application in order to “get practise” on this new generation of add-ins. We have found strong success in the two applications that are currently being distributed. In fact, dozens of Google Analytics data are imported into Excel files every day thanks to Keluro Web Analytics. KMailPrint allows the daily generation of hundreds of beautiful email PDF prints. Our downloads are counted in the thousands for applications for which we did not ensure any commercial support. As we have written in a previous post, the store’s validation procedure is very demanding, which will allow Office Store to only distribute quality applications. That was, among others, the basis of Apple Store’s success.