What Office 365 is Really About

What Office 365 is Really About

According to Microsoft, Office 365 is an umbrella for “subscription plans that include access to Office applications plus other productivity services that are enabled over the Internet.”

In other words, it is a subscription service that empowers organizations to work effectively using email, shared storages, messaging services, Office applications, and more—without the need to install server hardware on premises or manage und purchase software updates.

Put simply, when Microsoft saw the success of subscription-only and cloud-only Google Apps, which had seen impressive adoption rates since its launch in 2006, they decided they had to offer comparable business productivity services to not miss out on that growing market. Companies, particularly smaller ones, were increasingly demanding flexible payment solutions that could easily grow (and shrink) with their businesses. And after all, a SaaS business model would also generate more predictable streams of revenue and at the same time create an opportunity to facilitate sales of add-on services to clients.

In a first shot in 2009 (and based on the 2007 on-premises architecture), Microsoft launched its Business Productivity Online Suite (BPOS) with hosted online versions of the servers for Exchange, SharePoint, Office Live Meeting, and Office Communications. IT admins, especially in smaller firms, not only suddenly had an easy solution to outsource tedious server maintenance and patching, but were moreover attracted by Microsoft’s 99.9% uptime guarantee for the hosted services. This was certainly a good start, but in order to really compete against and potentially beat Google, a much more comprehensive service was needed.

Subsequently, in 2011, Office 365 (O365) made its debut as a successor to BPOS, with an extended offering of a new generation of cloud servers for Exchange, SharePoint, and Lync (now Skype for Business); moreover, Office Web Apps were included for the first time (now Office Online). The new services were based on the new 2010 architectures and capabilities of their on-premises equivalents. The biggest difference to BPOS, however, was to optionally include the desktop Office suite in the subscription model. Office desktop apps—certainly a must-have for the majority of businesses—could now also be rented on a monthly basis. The bulk of the services and software needed to underpin most general business operations was suddenly available in one subscription, knowing that you would always be upgraded to the latest versions.

Only a small part of Office 365: The Office desktop suite

One of the questions that often comes up and that can be quite confusing to answer is: “Is Office 2016 part of Office 365?” Confusing, because the answer is something like: “It depends, not really, but most of the time it comes together.”

Office 2016 is, at the time of this writing, the current desktop version of the Office suite for both Windows and Mac. And as such, especially for personal use, it can still be purchased “standalone,” with no monthly or annual fee.

But in reality, most O365 subscriptions include what is called “Office 365 Business” or “Office 365 ProPlus,” depending on your organization’s plan. This is basically the subscription model to lease the most up-to-date version of Office desktop within O365. (Some more confusion: These plans can also be chosen individually, in which case O365 is merely the access to the most current desktop—and online—apps of Office, but without the hosted servers for Exchange and so on).

The benefits of having Office 2016 as part of O365 are clear: unlimited access to all updates and upgrades for the time of the subscription. When Microsoft releases the next generation of Office desktop, you will have it first. IT admins need not worry about this anymore, as Microsoft takes care of all this remotely by default. Plus, all users get the right to install native apps not only once on their, say, Windows PC, but on up to 15 devices.

There is still much more to Office 365 in addition to what was mentioned in the previous paragraphs. What started out (then BPOS) as a cloud solution to render your on-premises servers redundant, has become a collaboration suite that not only includes your favorite spreadsheet and presentation software, but continuously introduces new solutions to address changing business needs and models. The current focus clearly seems to be on adding value to teams based on interactions between individuals.

As an example, since 2014, all O365 subscriptions come with 1TB of storage per user in OneDrive (for Business). That means that most average employees can host all of their files in the cloud and share them with whomever they like in their company from anywhere—not bad, right?! To be fair, you usually get an unlimited storage deal with Google Apps, but then again, not your favorite desktop productivity suite on all your 15 devices.

But Microsoft is not just interested in merely storing your files. Quite the opposite is true. Built upon Office 365, Microsoft has delivered services that connect with the data and behavior associated with your user account. One such development has been the Microsoft Graph (and Office Graph), which essentially analyzes with whom and what you interact with, and how these interactions are linked. These data are in turn, for example, used by Outlook’s Clutter function to show you important emails and, more prominently, by Delve. Delve is an all new app built for Office 365 that serves as an interactive dashboard presenting you the information that seems most interesting to you—based on your entire O365 organization.

Other applications have also been introduced as part of O365. Among those are a video portal and the Planner app, which is intended to be a light project management tool to structure teamwork through assigning tasks, setting due dates, and sharing files. Interestingly, every “Plan” set up also creates an “Office 365 Group” and vice versa. O365 Groups are a great tool on its own for any user to set up a collaboration space for a team or project. Every Group gets its own group inbox, calendar, SharePoint-based file storage, notebook, and—as mentioned before—Plan to manage the tasks.

These are just some examples of how Microsoft is transforming Office 365 more and more into a true collaboration suite that connects and leverages your existing data to provide a more efficient work environment for your entire business. Given that these new additions are all hosted online and accessible via browsers, Microsoft can roll out any new feature whenever they feel it is ready and you can use it right away from the App Launcher on the top left corner of every O365 site. 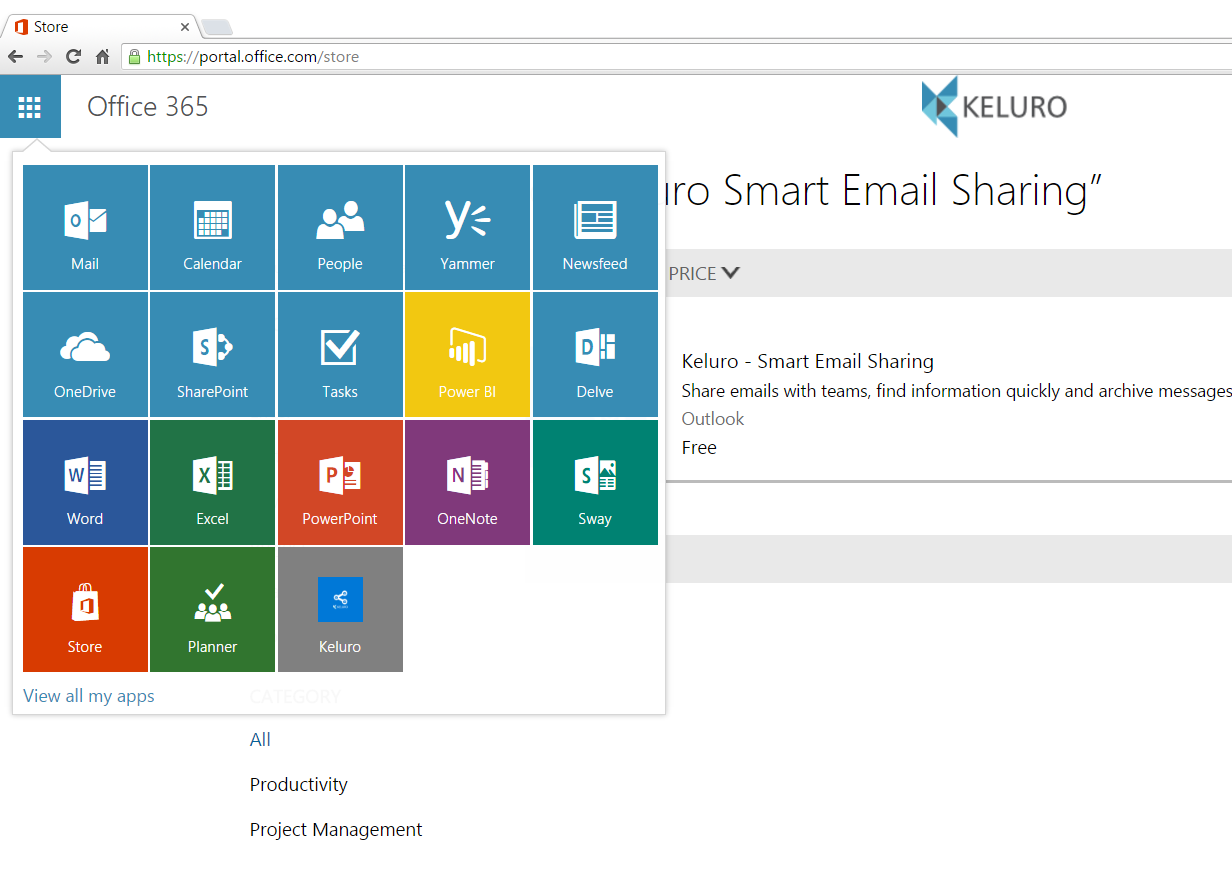 It is not only Microsoft that is working on enhancing the user experience throughout the O365 platform. While one could think that Microsoft’s constant efforts to provide new services and applications would scare away its partner ecosystem that has for a long time been developing tailored solutions for specific needs, this is not at all the case. New possibilities to utilize increasing amounts of data and the growing need to enhance collaboration in almost any business create even more demand for solutions that one could not think of some years ago.

This is why Microsoft recently also empowered outside developers to exploit new functionalities and create improved application experiences—while being able to offer their software on Microsoft’s own Office Store platform. Third-party apps can make use of O365 data via connecting to the Microsoft Graph API endpoint. With the introduction of the Office 365 Application Model, a new generation of web apps can now run inside the various Office applications as add-ins—across Office desktop and online, no matter on which device. Developers interact with Office data via a JavaScript object model to create a rich user experience that can even blend in seamlessly with Microsoft’s familiar user interface by implementing the Office UI Fabric.

At Keluro, we took full advantage of the newly available connectivity for third-party software. Integrating with data from Office 365, we created a standalone web app that lets you organize, share, and file the emails you handle in your Outlook mailbox in order to turn them into collaborative documents for your various teams and projects. At the same time, we developed a web-based add-in for Outlook so that you can share messages directly from the interface where you typically handle your email. This is just one example of how an independent company can create a business model through adding value to millions of O365 users.

Admittedly, this is not a comprehensive overview and there are many more things that O365 offers, such as, a “hybrid” on-premises/ cloud scenario—but these details would have gone beyond the scope of this post. We nevertheless hope that this article could shed some light on what Microsoft tried to say with its rather broad definition of O365 being “subscription plans that include access to Office applications plus other productivity services that are enabled over the Internet.”